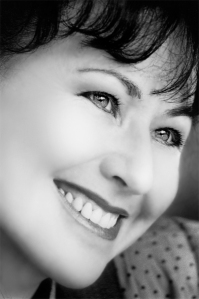 Born between the Namib Desert, the Atlantic Ocean and the Milky Way, she grew up with a deep connection with nature and a desire to understand the dichotomy between the separation we see out there and the ‘Oneness’ we feel within. Her first poem was published when she was twelve. An early fascination with spiritual healing inspired her to dive into ancient healing traditions, incl. shamanism, meditation and hypnosis, all of which is reflected in her creative work.

Advanced degrees in Germany and France led to over two exciting decades as filmmaker for the European Film & TV industry. In 1994, she returned to South Africa, to cultivate her own garden in a changing world, and to focus on her writing.

She lives in Noordhoek, near Cape Town, with her husband, at least two cats, and the world’s most curious Cape cobra coiling in her paper basket, pretending she’s not there.

Her latest work from the Press Release (August 2017):

BORN WITH WINGS – The Immortal Life of Piu Piu

HAVE WE LIVED BEFORE? THIS MODERN FAIRY TALE EXPLORES THE MYSTERY OF OUR CONNECTEDNESS – HERE AND IN THE ETHEREAL WORLD.

Born with Wings, yet, ironically, unable to fly and feeling abandoned, the heroine of this story transforms her life in her burning quest to belong.

NOORDHOEK, SOUTH AFRICA, August, 2017 – Have we lived before? We all know about the surge of interest in life after death as over 100 million baby boomers begin to face their own mortality. All this is reflected in popular movies and television shows, as well as trailblazing programs on YouTube and TED.

’BORN WITH WINGS’ (Gatekeeper Press, ISBN: 978-0-620-71491-4, $16.95) is a visionary fiction novel about Anata’s journey in her quest to belong, that mixes magical realism and the natural world in an unforgettable adventure time for the soul.

Set in the mystical landscape of the Western Cape coast of South Africa, the touching, hilarious, and wildly romantic human-animal bonds awaken a sense of guardianship for the Earth that will leave you inspired and longing for more. 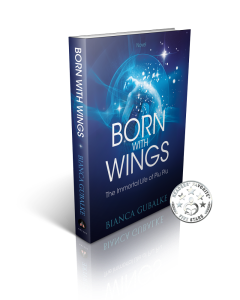 THE GERMAN VERSION WILL BE PUBLISHED IN 2018